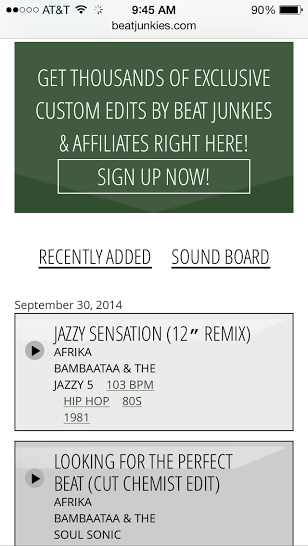 For all our Beat Junkies Record Pool Subscribers, today is your lucky day.  In honor of the Renegades Of Rhythm Tour, our good friend Cut Chemist gave us some exclusive Afrika Bambaataa Music Edits for the pool….it’s only for a limited time.  With edits of “Planet Rock”, “Looking For The Perfect Beat”, & “Renegades Of Funk”, you don’t want to miss out on these gems.  To download these edits & those interested in joining the pool, go to www.beatjunkies.com and sign up now!!!

And remember to get your tickets for the Renegades Of Rhythm LA Show on Friday, October 3rd at the Hollywood Palladium….don’t sleep!!! 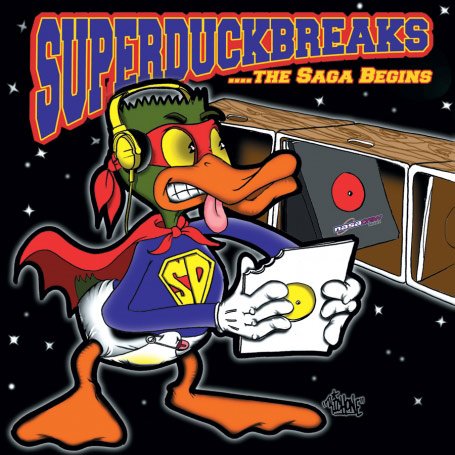 In 1986, our very own Dj Babu changed the game with this timeless scratch record: “Super Duck Breaks”!  It’s available now for our Record Pool Members at https://www.beatjunkies.com.  Join Today as a new subscriber for the Beat Junkies Digital Record Pool! 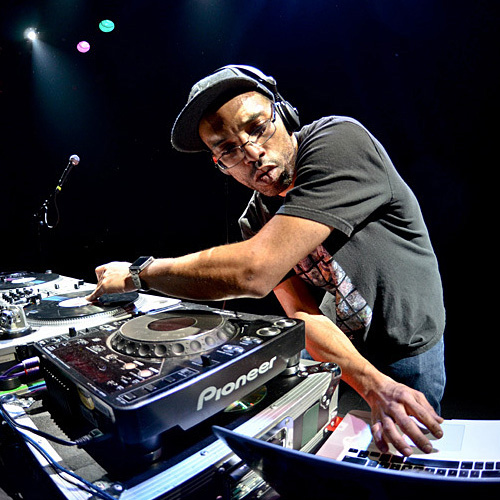 For all our Record Pool Subscribers, we have new edits by our very own Funky President, J.Rocc at the Beat Junkies Digital Record Pool.  Available now exclusively at https://www.beatjunkies.com 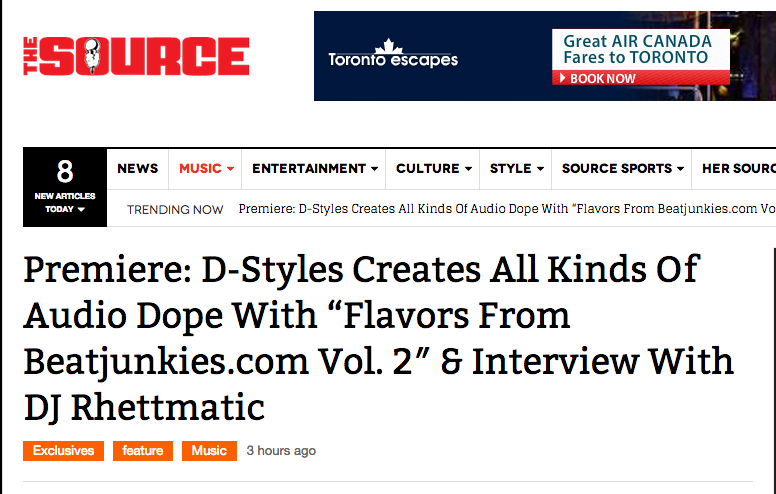 The Source Magazine did a spotlight on the Beat Junkies’ Digital Record Pool. To help celebrate this service that they’ve set up, D-Styles created a 25 minute mix Jazz, Hip-Hop, Funk, and Dance music. They also interviewed Rhettmatic about the Record Pool.

You can also listen to D’s exclusive mix here: 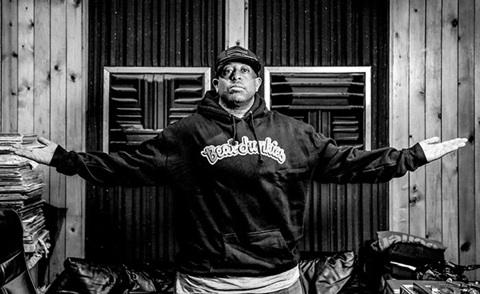 No introduction needed for one of the best to do it, DJ Premier !  His signature sound has helped define Hip-Hop and inspired the DJ Community World Wide. Rhettmatic recently had the chance to get caught up with our good friend DJ Premier/ Preemo after his show at the Yost Theater in Santa Ana.  Shout out to Keebler, Jeff, and the whole team at Headquarters.  Special big up to the Man himself Preemo, for giving us a ton of exclusive music for the Record Pool.  Make sure you go to our Record Pool section for the latest releases from DJ Premier’s own record label “Year Round”, and that Classic Premier Sound.

When did you know you wanted to be a producer?

DJ Premier: I knew I wanted to be a producer actually when I started reading the James Brown produced music. It always had a James Brown production. I did not know what a producer was, but it seemed like it fit what I thought it was once I became one. They must be the ones who are setting the whole tone how it is suppose to go down. He may not be playing everything; he may not even be playing any instrument; but he is going to be like “do it like this, or no no no, do it like that.” That is how I am, “put that there, and no that is in the wrong spot,” and it does not always have to be Hook/Rhyme, Hook/Rhyme or Verse/Hook, Verse Hook. Sometimes it can be unorthodox. You can do it any way, if you just feel it a certain way. That is why I like how James Brown says, “If it feels good, then it is good.” You do not want to follow a certain pattern; how does it feel when you do it? And that is how I do it! I do all my stuff organically and on the spot. I never knew about making beat tapes and stuff like that, and that just wasn’t me. Him (James Brown), Quincy Jones, Marley Marl is my all time Idol. I feel like he is the James Brown of Hip Hop production. It was just so funky with the records he made. It was just like, Yo there is so many great records, but he just had a style like so unexplainable. That is what made me say, “I got to do it!” Where somebody like him would say “I’m doing it right without being a biter!” No biting! We’re from the era where biting (pauses).. MAN!!! We saw many fights where people were going, “you bit my shit!” We witnessed beat downs over biting. Now you can sound the same and everybody will be like “yah, yah, just turn it up” and it’s like nah, nah, sound like your own self, so I can like your shit or otherwise your like a loaf of bread that doesn’t have a brand, you know what I am saying and I already got Wonder Bread.

Out of all the songs that you produced for Biggie, Jay-Z and Nas, which one is your favorite?

DJ Premier: (Exhales) Man! I like them all the same in different ways. I mean there were certain scenarios that gave birth to certain records. Certain Nas records were amazing, when we did New York State of Mind. Showbiz was there when I was cutting it.   Showbiz was the one who put me into D&D. He was doing a session with Lord Finesse remixing “Return of the Funky Man Remix” and wanted me to scratch. So I went there to lay my scratches and they had to leave. So he was like “Yo when they finish the mix, make me a CASSETTE” and I made me one.   So I hopped in my Mazda MPV and popped it in and it was just thumping. So I said “this is where I am going to make the next Gang Starr album “Daily Operation” at D&D, which is now Headquarters Studios.

How did you connect with Biggie for “Unbelievable?”

DJ Premier: Unbelievable came about by, I don’t want to say luck. Ummmm it was by him (Biggie) catching me at the right time. I was really busy at that time. You know Pete Rock, Large Professor, Showbiz, and me. We were all so heavily busy. We would all see each other and be in the same circles of music. Diamond D you know. The whole D.I.T.C crew, all that stuff. We were around all that, Tribe and De La (Soul) you know even Mr. Cee and (Big Daddy) Kane. We were all in the same circle of parties and events of things going on. So we all talked to each other about what we were doing next.

DJ Premier: Yeah, yeah! Like all the time. So BIG and them were younger dudes. Even Jay-Z was a younger dude to us, not a lot younger, but young enough where we were glad to see them be next chapter of them bringing it in right. And then they did it, and I’m so happy for their careers. All that stuff there was a time when you had to do it right to be given a thumbs up everywhere you go and a salute. Street music man! It could go as mainstream as you want it to, but it had an origin. And I like the origin of the purest form, which is dope beats, dope rhymes, and scratching.

You’re pretty much the innovator of the Hook Scratch?

DJ Premier: That is just from watching people. When Terminator X did stuff, when Jam Master Jay and Cut Creator and Bobcat and Joe Cooley and you know what I’m saying. Even (Dr.) Dre was cutting shit up back in the N.W.A, ahh the Arabian Prince, and World Class Wreckin Cru days.

Are there any young producers right now catching your ear?

DJ Premier:   On the young producer side, not really. Even though I study every one of them to see what they’re doing. I like the effort they put into staying in the game like the way we do it. The sound just does not grab me like the sound I was influenced by. I’m not being selfish or anything like that. It is just that I like what I like. So the newer stuff just doesn’t grab me.   I like some of the artists, I like J.Cole, I like Drake, I like….ah some of Big Sean’s stuff.   I’m not always into the production, but they got lyrics. So if we ever click, let’s get it in and I will give you a dirty one, but you know I just like raw lyrics. I’m from a certain funk! I’m a descendent of the funk! Like George Clinton and James Brown.

What is one song you wished you produced?

DJ Premier: I always say I wish I produced “The Bridge”  by MC Shan. That record with just the drum roll, the echoes, just everything about that record as simple as it was. I remember hearing it at a RUN-D.M.C concert at my college Prairie View. Dana Dane and Clark Kent opened up and RUN-D.M.C was at the ‘apex of apex’ and they came to my school during the “Raising Hell” time.   Like that was one of the most amazing things to witness, especially down there. It was one of the illest things; and when they were switching turntables to set it up and make sure the sound was right they were playing a 98.7Kiss mix from Red Alert, and I just started hearing, “Ladies and Gentlemen (beat boxing), we got MC Shan and Marley Marl in the house tonight (tonight) (echoes). They just came from off tour and they want to tell you a story about where they come from.” I was like, “what the hell is that?” I thought they were saying, “the breaks, the breaks, the breaks, the breaks,” and Kurtis Blow was already popular with “The Breaks” six years prior.   And I was like, “what is like ‘the breaks, the breaks, the breaks?’” I went to New York for the summer and went to a record store and I was like, “what is that record ‘the breaks, the breaks?’ and the guy was like, “nah it is ‘the bridge, the bridge’ and it was on Bridge Records.” It looked like a ghetto, gutter, hard record, the green label and Bridge Records. And then I already knew Marley Marl from Dimples D and Roxanne Shante‘s early music. So to see that I was like, “he got another one, but it don’t sound like a drum machine programmed record.” It sounded like the record (Impeach the President, by Honey Drippers), but how is he making the record loop like that? I did not understand that and I was like, “I got to learn that science. Whatever that science is I got to learn that because that is dope!” And that is what made me start doing it. 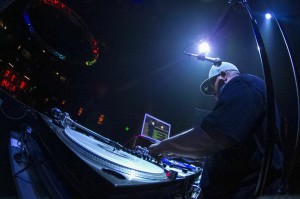 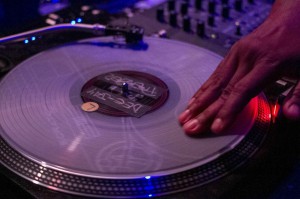