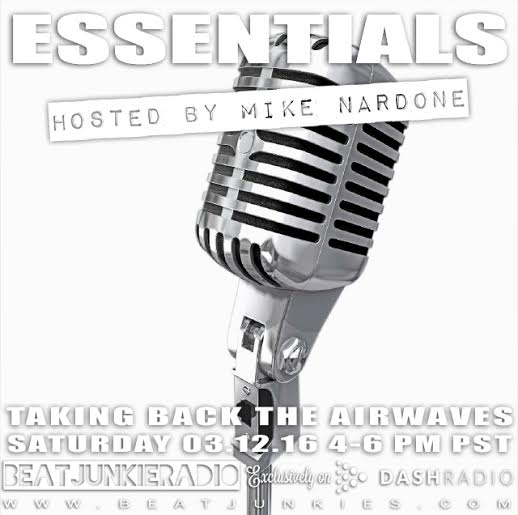 Today (March 26th), we will be rebroadcasting “Essentials With Mike Nardone” 1st Show on our Beat Junkie Radio channel on Dash Radio from 2-4pm PST.  You can listen to the re-broadcast by downloading the FREE Dash Radio app from ITunes or Google Play or listen on the web: www.dashradio.com. Then search for “Beat Junkie Radio” & click!

Mike Nardone‘s show will be airing live every 2nd Saturdays of each month from 4:30-6:30pm PST starting April 9th!

“Taking Back The Airwaves!”

It is an honor to have the legendary LA Hip Hop Radio personality, Mike Nardone return to the airwaves on Beat Junkie Radio. He returns to his roots by debuting his new show called “Essentials” on Beat Junkie Radio.  If you’re not familiar with Mike Nardone, he was the first person to start up a college Hip Hop radio show in 1987 at KXLU (Loyola Marymount) in Los Angeles called “We Came From Beyond” as well as having a show on the defunct 92.3 The Beat called “Da Joint” with King Emz.  Mike is the West Coast counterpart of the legendary NY Radio Duo, Stretch Armstrong & Bobbito Garcia. This particular audio is from Mike’s 1st show (March 12th); Our very own Rhettmatic was Mike’s assistant that day. 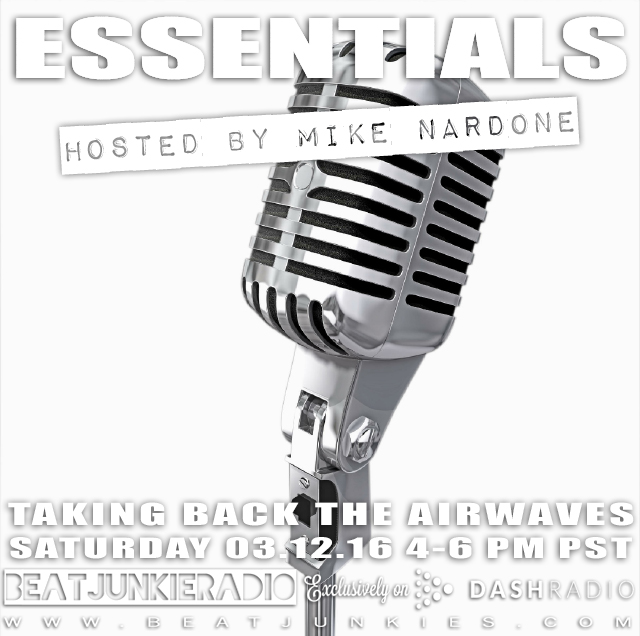 Ladies & Gentleman, The Beat Junkies are proudly to present the return of one of LA’s respected Hip Hop radio personality to Beat Junkie Radio…the legendary Mike Nardone! This man has helped break Hip Hop artists on college radio & championed Underground/Independent Hip Hop for many of years on classic radio shows such as “We Came From Beyond” on KXLU (Loyola Marymount) & “Da Joint” with @operatoremz on the defunct 92.3 The Beat in Los Angeles during the late 80’s & throughout the 90’s; Mike is the West Coast counterpart of Stretch Armstrong & Bobbito Garcia.
Make sure to tune in to “ESSENTIALS” this SATURDAY, MARCH 12, 2016, LIVE from 4-6pm PST by either downloading the FREE Dash Radio app from ITunes or Google Play to your smart phone/tablet or listen on the web: www.dashradio.com, search for “Beat Junkie Radio”. It is an honor to have Mike Nardone rocking with the Beat Junkies. Welcome back Mike!